If there’s one common thread that defines endmyopia, it’s the crazy-bearded, loony-eyed guru at the wheel.  A guru who more often than not appears to be largely out of his mind.   There’s clearly a […]

If there’s one common thread that defines endmyopia, it’s the crazy-bearded, loony-eyed guru at the wheel.  A guru who more often than not appears to be largely out of his mind.

There’s clearly a lot of slightly strange rhetoric happening on this site.

Your favorite guru’s overall approach is dictated by the cosmic law of zero f*cks given.

Does this thing make money?  Whatever (also no, not compared to an hour of trading it doesn’t).  Does the mainstream find Jakey credible?  Let’s definitely hope not.  Do new visitors gravitate towards the unrelenting charm and divine charisma and sheer credibility of the majestic beard?  Well all right, that of course is a given.

But let’s not brag.

Sure, I want you to improve your eyesight.  But I also very passionately hate all the bullshit Internet ‘doctors’ and ‘experts’ and ‘journalists’ and ‘social media influencers’ and all the rest of the fake crap out there.  They all try to make a buck while wasting a ton of your time with their jungleberries and remedies and ‘coaching sessions’.

I don’t want you to come here looking whether you can trust me.  People still do though, people still e-mail me going, you don’t look very trustworthy, Jake.  And the whole time I’m thinking, really?  A guy who claims to be the last of the living eye gurus, with an imaginary beard.  And you’re trying to tell me that you’ve got “reservations” about trustworthiness?

But fine.  Keep tempting me.  One day I’ll grow an actual beard and pay for a Nepalese birth certificate, and pay some villagers to be in a glossy video interview telling the story of the tribe of eyegurus that used to live on top of their mountain.  With lots of dreamy slow motion b-roll video of pans of a mythical mountain, shrouded in mist and sounds of the wildley wilderness.

You see sir, the old grizzled toothless villager woman intones gravely into the camera, now there is only one left.  He came down from the mountain just before the big rock slide.

We don’t know where he went.

Me thinks humanity isn’t ready to stop looking for their gods.

So if you haven’t stopped reading yet, then let’s get to some divine improvement reports.  You want the man with the beard and the sandals, fine.

All hail the glorious beard.

Perhaps my own favorite, and the inspiration for the clickbait title, is this one from Mikel.

Be skeptical.  Survive the sheepeling.

Whenever I find some fascinating article or study or claim, what’s the first thing I do?

That’s right.  Go to Google Scholar.  Start looking for studies.  Screw the plebs-Internet with all of the traps of glossy articles and he-said-she-said.  Go straight to the place where at least skepticism can be put to good use via actual data and studies and some amount of reason and logic.

Example:  Should I take vitamin supplements?  Google Scholar.  And then, go to the lab to get a blood test and look for deficiencies.   That’s how you don’t get suckered – as hard as possible, at least.

And obviously, no, I don’t have 9,000 bots writing improvement reports.  If I was going to spend tens of thousands of dollars to come up with some way to make money, it’d be filling a room with Vietnamese university graduates and making them do trades for me.  And you held a gun to my head and insisted on some Internet health scam with 9,000 Facebook bots, it’d be 100% for balding.  Balding ‘cures’ is where the Internet scam money is at.  Dudes losing their hair will spend any amount of money for even the faintest hope for hair.

Nobody gives a crap about myopia.  Except you, most darling blog reader, and a very small handful of rather strangely non-docile kittehs.  Most people are fine with blur.

Let’s get on with it.

Wayne who is also a group moderator.

You know what my bots would look like, if I was that ambitious?

They’d all be Kristen.

Feast on all that.

And they’d also be Matt, who adds some meaningful emotional context to the journey:

Care about the children.

How many gains stories should we fit into one blog post?

I used to do just one each.  Every story is one person who cares about their eyes.  Went out and did a bunch of research.  Overcame the difficult mountain pass that is Jake throwing curve balls of beards and sagas and rants and digressions.  Somebody who did the e-mail series, started measuring their eyesight, figured out where and how to get lower diopters.  Found the stimulus, did the logging and ultimately, got the 20/20 gains.

That’s non trivial.  Each one of those stories is someone who stands out from the crowd.  All people I’d be glad to know personally.  People who don’t accept the status quo, who are skeptics, who are willing to take steps into the unknown.

But then if we’re going to not be sarcastic for a second, I just can’t always manage the time.  It takes up hours to collect screenshots and take out last names and resize things and fix things and write a post and edit a post and make a terrible Photoshop image and throw in some links and references.  Vaguely check spelling and things.

I could be making $5,000 profit in trades in the same time, or be out kiting or playing with my kid or seeing friends or finding adventure.  Or making it through the inbox or fixing bugs on the site or uploading a video. Answering BackTo20/20 forum questions.

So lately even though each person should have their own post, we put several in one.

And no matter how many I post, they barely scratch the surface.

The reality is that your favorite eye guru can afford to act like a loon.  There’s nothing and nobody out there with more tangible, practical, actionable experience on natural myopia reversal.  NOBODY.  Until AI happens and tells us all that we’ve been retarded living in 16th century myopia-treatment-land, this is it.  And not because Jakey is so smart (not even I could sell that), but because this is the destination for myopes. Thousands of individual experiences, thousands of tweaks and tests and trials and failures and successes.  If you want to get out of glasses, this is basically the place you have to come.

Is it because, or despite Crazy VonJake?

Who knows.  Until mainstream optometry stops lying, until the status quo stops being “you’re a genetic failure”, I will continue to make fun of them, as well as the Internet  health “gurus”.  We’ll keep it up with the rhetoric about the last surviving eye guru.

One more.  Just one more.  Amorelle:

You validate this resource.  You.  Not Jake, not some patented product, not some shiny marketing, not an amazing origin story.

Your experiences, your voice, is what’s meaningful.  Keep sharing, keep posting, keep writing and recording and talking about your experiences. And keep making all the 20/20 gains!

Because don’t make me go to Nepal with a film crew.  ;) 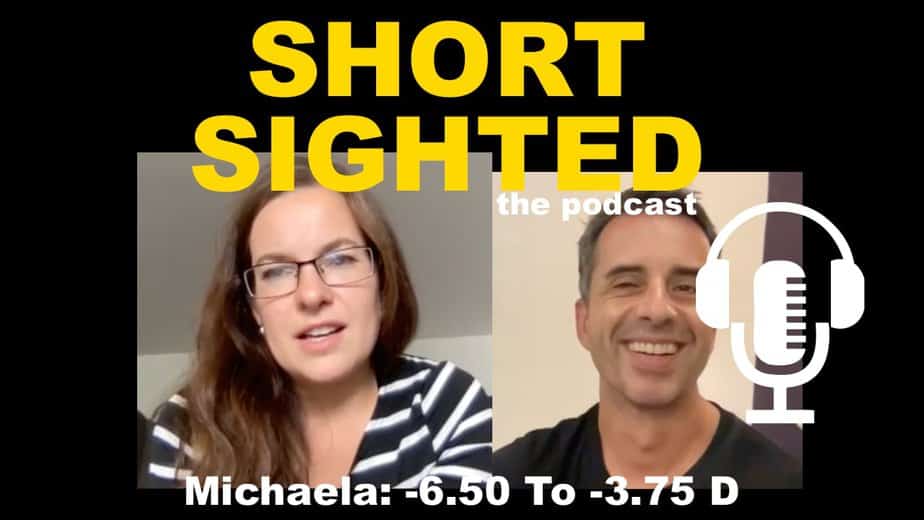