Bet your optometrist hasn't told you this little story. 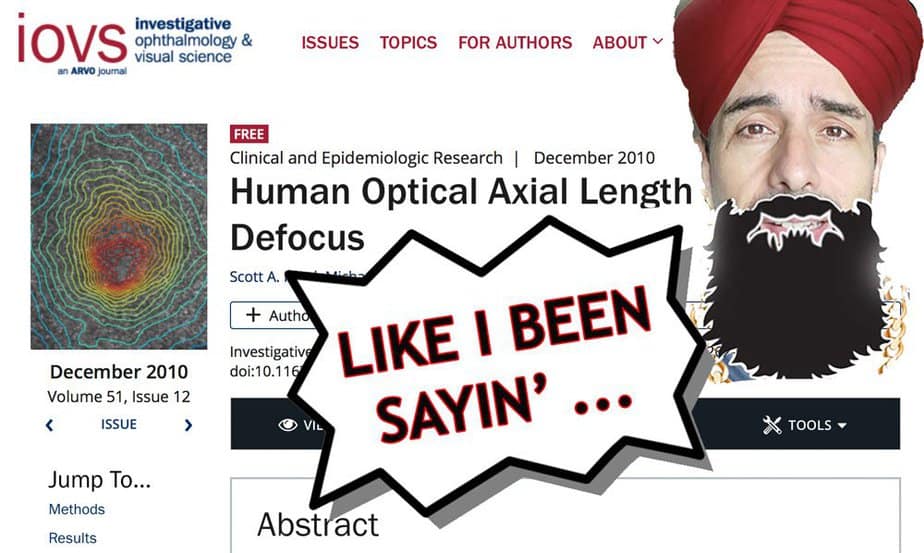 Having tens of thousands of regular readers of the endmyopia bloglet has some distinct benefits for all of us, as a community.

One of those benefits being the many many eyeballs looking at the vast amount of studies out there.  Between the advent of Google Scholar (which didn’t exist back in the early guru days) and having thousands of myopia-dissidents look at the available body of research, we continue finding new and interesting science that supports our myopia shedding ways.

Get ready for a study that should have by all rights entirely shattered the very foundations of modern mainstream retail optometry.  A mind boggler of a study which clearly shows how immediately and significantly minus lens use absolutely and unequivocally induces myopia in the wearer – by elongating the eyeball.

I have to be honest here with you, darling kittehs.  Even the most preposterously bearded eye guru wouldn’t have ever thought to claim that 60 minutes is enough to see measurable change in axial length.  That’s a whole new amazing level of just how quickly our eyes respond to focal plane input.

It’s science vs. ‘medicine’ (of the retail variety).

Here it is, published by the Journal of Investigative Ophthalmology & Visual Science in 2010, including over 70 peer reviewed vision science journal published references:

The whole study is here.

So all this being said, now indelibly added to your scientific knowledge of your amazing eyeballs, let’s get straight to some inevitably gratuitous preening.

Over the years the mainstream optometry contingent has slowly receded from first being bullying and threatening and sending lame e-mails and derisive comments on our social media pages.  As our numbers have been growing, our social media presence becoming more formidable than any one of their outlets, they learned to shut their mouths and leave the science to the endmyopia reader darlings who actually know what they’re talking about.

Still it sometimes is frustrating to have a near perfect track record of thousands and thousands of myopia cases significantly reduced (and even all the way back to 20/20).  A track record going back over a decade and more recently substantiated by the Internet and all of your Facebook progress reports.  What more could anyone want but a method to reduce myopia that just works, for just about anyone willing to use it properly?

But the science Jake, they’d say.  Where is the science.  So we added a whole section here, dedicated to the science aspect.  Still of course not good enough.

Above study is one of those, that really makes you think.  They just *have to* shut up now.  How much more unequivocal can it get?  Clearly their treatment causes precisely more of the problem.  The global progressive myopia epidemic is fundamentally accelerated  (one may even think, caused by) by lens use.  Case closed, your honor.

Of course this doesn’t matter one iota in retail mainstream reality.

People want a quick fix for their myopia.  People are addicted to screen use, and if you give them a way to keep their addiction seemingly without consequence, they’ll pay you for it.  That’s why an old eye guru owns a whole lot of lens manufacturer stock and that’s why this whole myopia thing will just continue.  Drugs to mask a philosophically fundamental problem of how we experience reality – increasingly by passively staring at a screen and our eyes adapting to this fact.

At least though we have here endmyopia and the imaginarily bearded sage and the majestically wind-blown temples of all of your 20/2o gains.

Every lowered myopia progress report, every Facebook group member, every e-mail, every social media share, every Youtube like, is another piece in the temples of distance vision truth.  Anyone looking to get away from their screen addiction and back to living a real life, seeing what’s really ahead, playing outside, can find use more easily thanks to you.

Oh and before I (almost) forget.  Check out my in-depth guide on where to buy glasses (online or local retail) without getting ripped off – and also getting the best possible outcome.