I get a lot o fe-mail from concerned parents, about their children being “prescribed” glasses.

Here’s part of one just from today:

A busy parent, having bought my awesome BackTo20/20 course, hoping for help.

(And yes, the heading picture is not representative of a 9 year old. Not much time for well considered Photoshops these days.)

The thing about the course, it’s almost 20 years in the making.  Many tweaks and learning experiences on my part, figuring out things and improving the approach based on recurring questions and issue.  It’s been a labor of beardly love (or at least, trying to get less support questions).

And … it takes time to improve your vision.

Here is what I told this parent, and likely what I might tell you as well:

The thing about the course progression rate:
Eyes adapt very slowly.  Generally at least a couple of weeks before some diopter changes get a response from your eyes (and visual cortex mainly), and 3-4 months before proper adaptation to changes is realized.
I used to have the course as a ‘book’.  It was a miserable failure and it took me a long time to figure out the issue – which is that people consume the entire thing at once, implement changes as they interpret them, and entirely miss the most important aspect:  which is the timing.  Example, we don’t talk about distance glasses at all for the first month.  It’s not even an accessible topic.  If you do change distance glasses any sooner, the whole thing doesn’t work (nearly as well).  Because it really takes a month of just figuring out what the correct close-up solution is, and getting used to that, and active focus, before it even makes sense to discuss distance vision.
All that just to say, there’s no real quick absorbing the info option and then taking action and moving on.
I’d love to be offering some faster version since 100% I know you’re crazy busy.  My parents are both MDs also, I definitely get how it is.
20 minutes pers session, at most 2-3 a week.  It’s more like going for a run with the long term goal of better cardio, than “let’s get this done and over with”.
For a quick “fix”:
Print an eye chart to put up at home.  The #1 issue with these 1 diopter range myopia cases usually is ciliary muscle spasm.  Find out when he sees best and what line that is.  Compare before and after homework, screen time, figure out the pattern of what activities strain the eyes in a tangible way (can’t read x-line anymore).  Distance breaks and a good habit between distance and close up, especially if there is a tempting distance vision activity / hobby for kids, makes all the difference.
Kids eyes adapt super quickly.  If he starts to wear those glasses, a year from now he’ll need -2.  Conversely if there’s something he finds that he loves doing that doesn’t involve screens and lots of natural different distances, he’ll see better fast.
Also lighting makes a big difference.  Real test, can he see facial expressions at normal distances.  I always look for that, so their socialization doesn’t get disrupted because of lacking eyesight.

It’s like when I put a keto diet on my experiment list, or getting serious about the gym.  It needs a little slot in your schedule, in your allocation of time.  You may have to cancel a few relaxing scrolls on the phone, or some TV show, or an hour of Youtube may have to be taken out, once in a while.

Believe me, I’m the least motivated, least role-model-like, I myself would be the worst of all endmyopia students.  Plus I’m busy with plenty of things, and tend to not just throw random new projects on my schedule.  So I get it and I’m totally with you, if you look at all this and go, duuuude that’s asking a lot.

Seeing well is a worthwhile investment, in the long run.  See what other habit needs to be getting a tiny bit less attention, so you can look back a year from now, with less diopters to worry about.

Or even more awesomely, if you’re doing it for your kids. 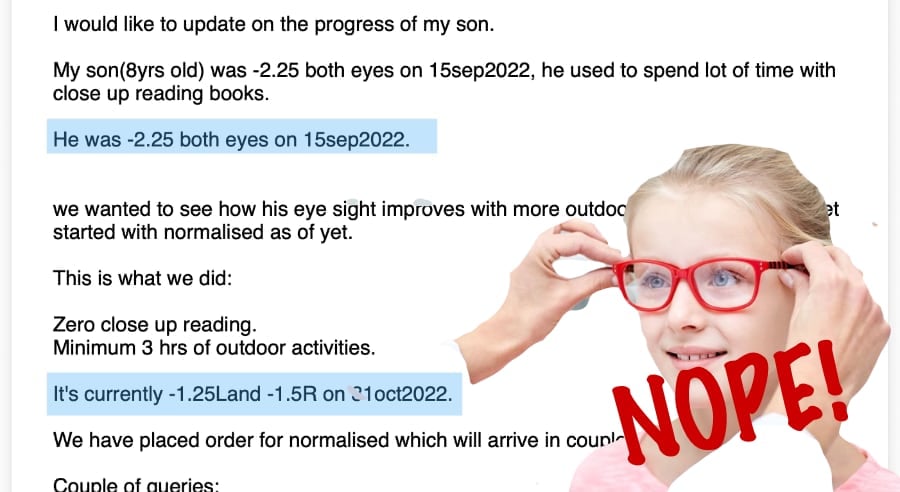