Accuracy In Question: Snellen Eye Chart vs. The Autorefractor

Hi this is Shaun from Singapore. I’ve been religiously practising active focusing and pulling for 6 months now…

Recently, I paid a visit to the optometrist and had my eyes checked. From the eye machine, my eyes had improve from -5.50 OD and -6.00 OS to -5.00 OD to -5.50 OS. However, I’ve been wearing a -4.00 OD and -4.50 OS glasses for pulling focus(basically for daily wear) and the puzzling thing is, I can see the 20/15 line on the snellen chart! even the optician was surprised and could not give an explanation to this scenario. Perhaps you have some opinions on this?”

First off, Shaun has done quite nicely improving his eyesight, no matter the type of measurement used.  Half a diopter in six months per the autorefractor, and a diopter and a half per the Snellen chart.

Those are excellent results.

That’s the first thing.  The second, my favorite of the optometrist tools of smoke and mirrors – the autorefractor.

If you read the blog on a regular basis, you probably already had a few doses of me picking on that contraption.  Why does this machine bother my sensibilitites?

First:  The autorefractor is one of the main contributors to unnecessary astigmatism prescriptions.   Depending on how the practitioner uses it, you might get that astigmatism correction added to the lens setup before you even look at the eye chart, after the optometrist runs the autorefractor test.

I’ve seen it countless times.  They have you do the autorefractor, use the numbers to start you on the subjective measurement (eye chart).  As long as you don’t see an issue with it, the astigmatism correction stays.  And before you know it, that number starts going up, as your eyes are developing lens-induced astigmatism as a result.

Of course this is you taking my word for it.  But let’s look at what the American Academy of Optometry has to say about it.

In 1997 several optometry PhD’s got together, and did a study comparing the subjective measurement (eye chart), to a Nikon and a Nidek autorefractor.  Here is what they found:

This study assessed the repeatability of the Nikon NRK-8000, the Nidek AR-1000, and subjective refraction. In addition, the accuracy of the Nikon and the Nidek were evaluated in comparison to subjective refraction. Measurements were taken with all 3 techniques on 2 separate occasions with a test-retest separation of at least 24 h. The right eyes of 30 normal subjects were used. Repeatability and accuracy statistics and plots were generated using matrix representations of dioptric power. Subjective refraction was the most repeatable method, with the coefficient of repeatability (COR) found to be 0.611, 0.224, and 0.490 in the vertical, torsional, and horizontal meridians. The autorefractors’ COR was found to range from 0.712 to 0.826 for the vertical and horizontal meridians, whereas the torsional meridian ranged from 0.224 to 0.319.”

You can find the whole abstract here, and here is the link to the whole PDF of the autorefractor vs. subjective measurement comparison.

I bolded the salient point:  A Snellen chart reading produces more consistent results than both of the autorefractors used in the comparison.

You will never in a million years find a funded and published study saying that autorefractors are worthless pieces of philosophical numbers technology.  It’s part of doctrine that complex and modern technology must add value to the process.  That is foregone conclusion.  The Academy of Optometry is also hardly going to bite the hand that feeds it, nor cause mayhem and confusion by ever publishing a study that shows what happens in the field, with real world use of autorefractors.

Real world use is what Shaun experienced.  A 19% difference between the reality of what he can see on the Snellen, vs. what the optometrist managed to get the autorefractor to assess.  That’s the reality.

But even with serious PhD optometrists and nice equipment, and laboratory conditions, they couldn’t get the autorefractor to preform as repeatable results, as a the simple “subjective” (eye chart) measurement.

Take a moment to consider that.  It boggles the mind, that they even got this published!

You can print a Snellen on a 5 cent piece of paper, stick it on a wall, and get a more repeatable result than you will from a 10,000 Euro autorefractor, run by a room full of optometry PhDs.  While the results are “pretty close”, the end result still says that clearly an eye chart measurement is more accurate than an autorefractor.

You probably read this and shrug.  I actually laughed out loud rather gleefully when I had first seen it years ago, and forwarded it to a dozen guys in the field who I enjoy irritating once in a while.

Back to the point.  So what’s the autorefractor worth, in the diagnosis process?

Sometimes, if I maybe had a glass of wine or two, you might hear me mutter that the autorefractor is nothing more than means to assert professional authority and aid in the lens sales process.  Something that looks imposing, you are told to sit and look and then the machine makes some noises and spits out a set of numbers.  And then your optometrist scratches his beard, mumbles things, and dials in some numbers for lens corrections for your Snellen test.  It’s all very serious and ritualized, and taking the process out of the realm of your understanding.  Like all the stage tricks at a magic show, distracting you from the simple truths (which is, just go print an eye chart for yourself).

Some British friends who are into hunting once told me about some saying that goes “this dog won’t hunt”, the worst possible assessment to be made of a hunting dog.  In their circles at least, that phrases translates to any tool that won’t do the job it is meant to perform.  It would seem like the autorefractor then is quite of the non-hunting dog variety.

So what’s my actual point to take away from all of this?

Trust your eyes, trust what you see in front of you.  Don’t be swayed by fancy equipment or intimidated by medical terms.  If Shawn can see 20/15 with a -4.50 lens, is there any sense in even looking at an autorefractor who puts him at 19% more correction?  Do you want to go down the road of lens-induced myopia, by trusting something other than what you yourself can reliably reproduce?

All of these things, with a bit of careful observation, speak entirely for themselves. 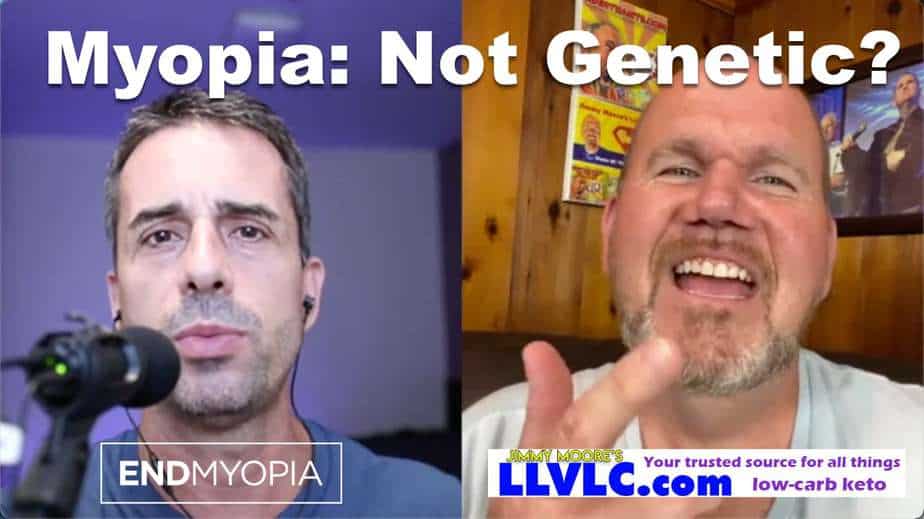 Real Talk With Jimmy Moore: Myopia Is Not Genetic?