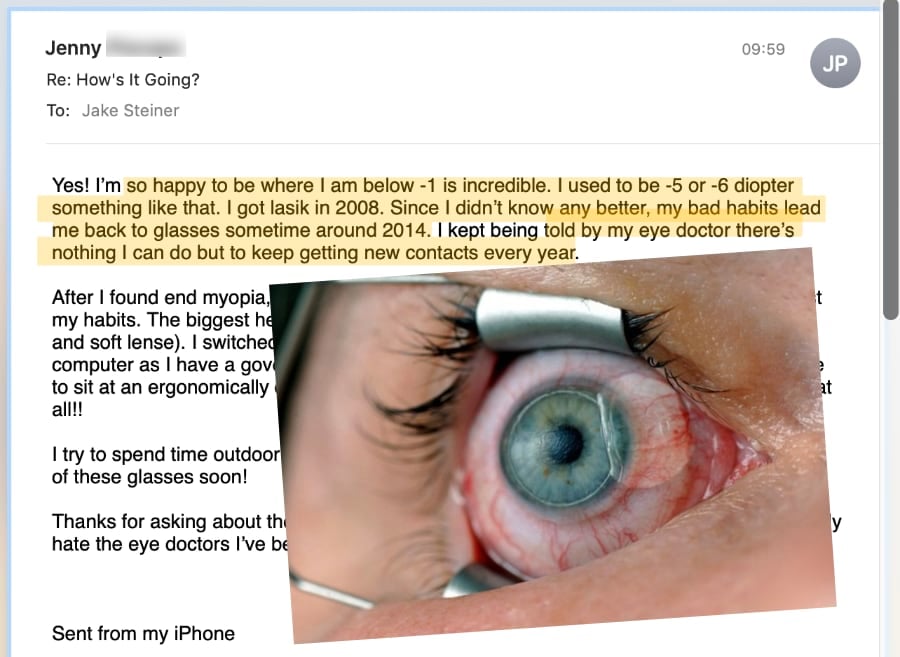 It covers several important points (that an old guru gets asked about in e-mails four hundred seventy billion times a week).  Mainly yes, LASIK is not a solution, it’s precisely the same bandaid as a minus lens, just this time it’s permanently cut into your eyes.

And also mainly yes, a lot of the sort of “doctors” who advocate LASIK, are in fact morons.

Some sweet gains right there.

And then I followed up on that e-mail, since whenever I get these super short ones, I hope to get more details for you, my most darling kittehz.  Short gains updates are like ‘testimonials’ – they sound nice but you’re not going to find anything actionable in there that you can apply to your own journey.  So I like details, since it may give you something actually useful.

Here’s what Jenny elaborated, upons the nudges for more of teh deets.

And this is the experience a LOT of people have.

Also why an old guru will refer to LASIK doctor types as unequivocal morons.

Morons truly is being charitable and giving them the benefit of the doubt.  Because actually it should be a crime (and basically is, according to the ex-FDA head himself).  A crime against logic and reason at the very least, and against your eyesight definitely on an ethical level.

One has to be a classic type of total moron to not realize that minus lenses cause progressive myopia (all the clinical evidence clearly says so).  And in practice anyone in the field would know that whenever they sell lenses, that customer will be back for higher diopter lenses before long.

So how would LASIK be any different?  It’s just another minus lens.

Before we get off the LASIK rant, realize that this darling blog has a whole entire section dedicated just to the moron-ery that is all of the world of LASIK procedure.

LASIK is a business.

First of all, laser eye surgery is a 2 billion dollar a year business.  In 2000, the New York Times described LASIK as a “turf war”, with providers fighting to grab market share and profits.  The market is expected to grow to 3.69 billion dollars a year by 2020.  That’s well over 40% more procedures, potentially.

Good news is that Jenny looked on the bright side, and didn’t listen to, yes, the next idiot who claims to be a doctor (but doesn’t know basic biology or vision science).  Instead she went and did the actual rational thing, which sadly means going to the Internet and perhaps looking at some basic biology and actual troubleshooting.

It’s like having to go fix your own car because every mechanic will just break it more and then tell you that’s normal.  Imagine this sort of thing in any industry besides optometry, really.  Oh you came here to make it better?  Sorry, we can only make it better for a short time, and then it’ll be actually worse.  And then you’ll have to come back and repeat the same thing all over again.

Over and over till eventually we’ll sell you some other procedures, which will be expensive and irreversible, but also only probably fix things temporarily.

You see why I hold these folks in less than the highest esteem.

So go do your own research.  Try to avoid the rabbit hole of Internet conspiracy theories, pseudoscience, magic jungleberries, and self proclaimed gurus.  In today’s world your best defense against being harvested for your wallet is to look at science and research and not trust anybody based on credentials (or fluffy Internet promises).