This is a great story and progress update! 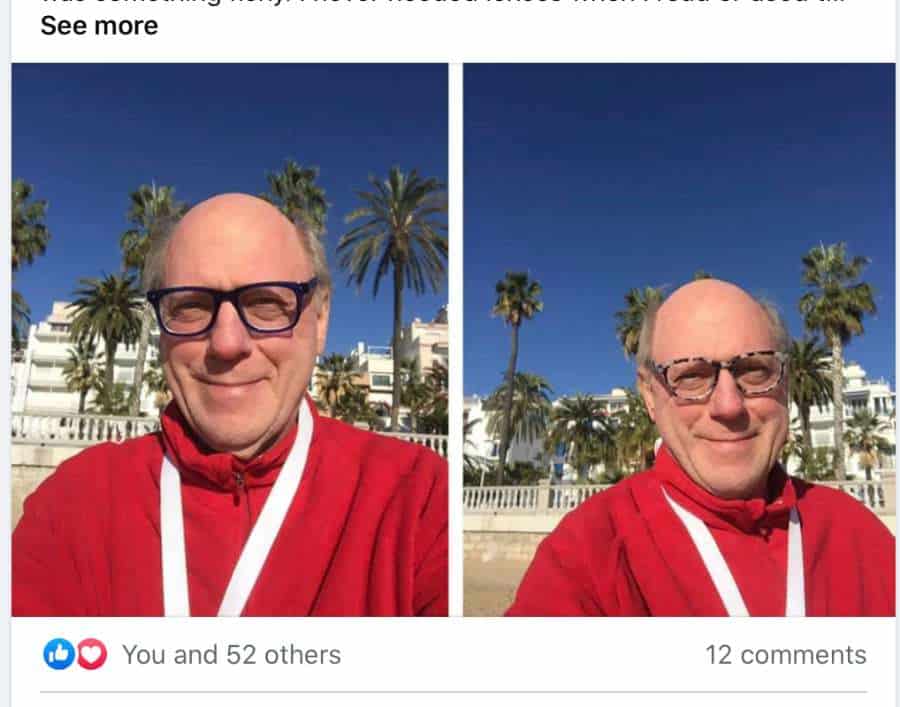 Sharing Roger’s update from the Facebook group with you, just because it’s a heart warming read:

It has been like a particularly good Christmas morning at my house today, and I’m not sure I’ve ever been more pleased with what was under a gaudily decorated tree! I will go into some detail in case my (to-me-striking) experience is useful to others who are, like me, quite new to the conscious Endmyopia process and as zealous about it as I am.
A year ago they were fitting me with -3.50 lenses, but I knew there was something fishy. I never needed lenses when I read or used the computer, and I habitually ditched them when I did so—against optician advice. Though I sometimes wore progressive spectacles, for my contacts they were putting a “distance prescription” in my left eye and a “proximity prescription” in my right eye. But I wore contacts less and less because I like to whip my glasses off except for distance, which is harder to do with contacts. About a year ago the optician said, almost in tones of complaint, that “You’re becoming less nearsighted” and prescribed a reduction to -3.25 for distance. I protested that I didn’t need a lense in my right eye, since what they were putting in it made it harder for me to read. She insisted that it was bad for me to wear only one lense, but I have been doing so anyway for much of the past year. Then I went back to be examined in October of this year and was reduced to -3.00 for distance! Since she was recommending progressive contacts this time, she gave me a pair to try out for a couple of weeks.
I hated these new contacts, and during my trial period I saw Jake on YouTube with Luke Storey. What he said rang so totally true that I ditched Luke Storey about 20 minutes in and seached for more Jake. Thanks to this FB group and Endmyopia.org, I then demanded the seven days of e-mails, lapping it all up and corresponding a bit with the Bearded One. So I was dying to start normalizing. But of course it takes time for those orders to arrive. I was raring to go, since it was now evident to me that the glasses I had (which were progressive ones) were absurdly over-correcting, and I was highly impatient about wearing them. I had some old unused -2.75 contacts that had been prescribed for my *near* eye. I put those in both eyes and saw with total clarity for distance. But they were too stong for reading, which is what they had been prescribed for in the first place! So for the past month I’ve been wearing one of those in my left eye, with nothing in my right eye, only when I leave home and wearing nothing at all when I’m at home. And doing active focusing obsessively.
I have totally ingested all the warnings about going too fast, so even though my measurements and centimeter calculations told me that I was ready for -2.00, that just seemed possibly too good to be true, having never been prescribed anything less than -3.00 for distance. And I didn’t want to be one of those too-eager cowboys who galloped ahead and messed up my progress. So I ordered two pairs at -2.00 and two pairs at -2.25, fully expecting that I’d have to start with the latter. I got notices that the -2.25s were on the way, so all day yesterday I expected them to be delivered and didn’t wear any lenses so that I’d be ready to put my new ones into freshly expectant eyes. But they didn’t come.
So I got up this morning and still didn’t wear any lenses, because I was sure that at least one pair of my -2.25s would come. Joy! At 11:30 a.m., the doorbell rang, and I was handed *two* packages. I was very excited. Then I saw the return adresses: they were both going to be -2.00. Still excited but very apprehensive, again, of going too fast, I walked down to the sea (without any glasses on, of course), walked for a while in the brilliant sunshine, barefooted in the sand, feeling great. And then I put one of the -2.00s on. I COULD SEE EVERYTHING as well as I’ve ever seen through lenses in my whole sorry life of being a Four-Eyes! I kept looking for some sign in the distance that I couldn’t read, the clock in the church tower, and the four red stripes in the flag of Catalonia. It was unbelievable! I tried the other pair. Same result. (Both are pictured below.)
So I took a longish walk both on the beach proper (partly because right next to the water is the one place that we are allowed to go without a mask and the one advantage of the dratted contacts was that the mask didn’t fog them up) and then a substantial walk on the paved promenade where there would be plenty of signs to read. Fantastic results. I remind you that this was one and a half diopters less than they were selling me a year ago.
There is a sequel. A few minutes ago, I got home, walking through streets where I expected everyone to compliment me on my glasses

, and was barely back inside when the doorbell rang again with another package! This one was one of my pairs at -2.25 that I had been so yearning for during the past three weeks. I put them on and my first impression was a little dizziness. I haven’t worn them outside yet (though I have looked a fair distance at trees in neighboring gardens, etc.), but it appears that I’m going to have two new unused pairs of -2.25. I’ve never been happier to waste money.
Now, lest you think I showed myself to be chicken-hearted in not trusting my -2.00 measurements, I tell you that I’ve also shown a bolder side by ordering a pair at -1.75. I promise not to use them until it’s clearly time, but I didn’t want this agony of waiting for delivery again when I will someday know that I’m ready to reduce another quarter-diopter.
So, if you’ve bothered to read this, I hope it’s of use to you, because I now feel fervently that we need to share with other myopes the good news that, just as focusing got worse in stages over the years, it can get better in the same way. Thanks to all of you whose sharing continues to help me. 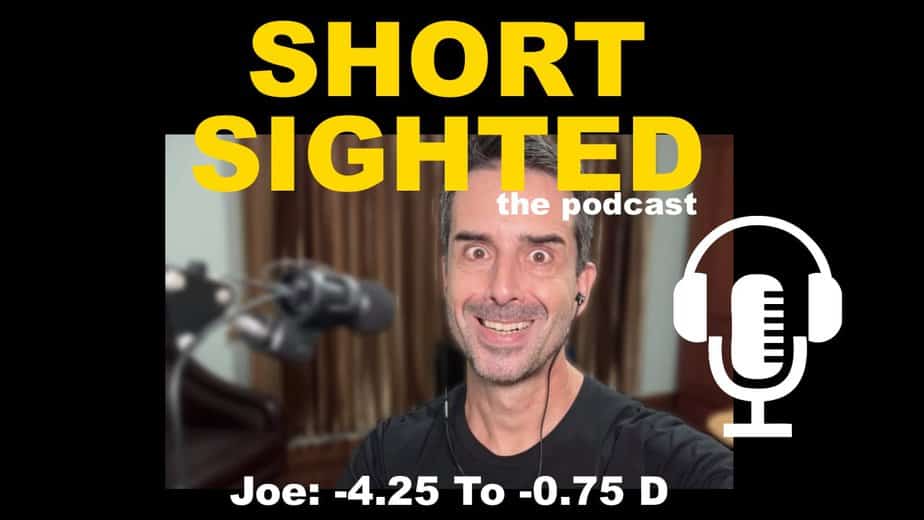 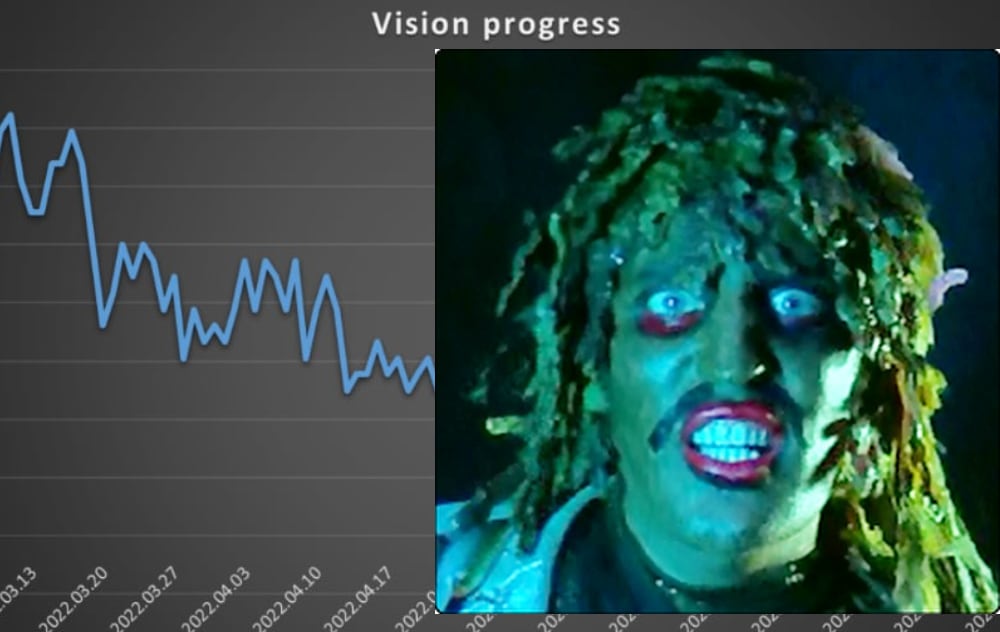